I smile when I update the website to welcome a new issue, and I find that a page named ‘March-April’ is already there. We are halfway through our second year of regular publication since August 2014. It feels great, and I must thank our dear readers for believing in us and keeping the readership on an upward trek.

Our second issue of the year is a bit late in its release, and we apologize. As mentioned in our previous editorial and all our social media channels, this month we have actively been working on our Indo Pak Project 2016. A project that brought together two countries for the love of literature.

We conducted two literary events in both Mumbai and Lahore, that took place simultaneously, dedicated to South Asian Literature and its scope in cross-cultural collaborations through different creative mediums. Both events went through a similar event flow that included panel discussions, talks, workshops and poetry sessions. Unfortunately, I couldn’t attend either but being part of it’s planning and watching the two events happen at the same time, through live twitter coverage and photographs was a beautiful feeling indeed.

At our Mumbai event, the event was organized by our Managing Editora, Huda Merchant, who was also the mastermind behind the entire project, along with two interns at Somaiya Center for Lifelong Learning. The event in Mumbai began with a panel discussion on ‘South Asian Writing Today: Indian & Pakistani Writers with a Global Audience’ with authors Annie Zaidi and Janhavi Acharekar as the panelists and Reporter & Spoken Word Poet, Shruti Sunderraman as the moderator. The panel talked extensively about South Asian Literature and how today, thanks to English being a global language has helped literature transcend borders, which has not only helped people understand each other better but, has given people greater access to such literature, which wouldn’t have been the case before. Furthermore, the panelists discussed the impact of literature in cross-cultural barriers, altering stereotypes, taking various Pakistani and Indian books and writers in account. The panelists heavily laid emphasis on the emergence of publishing today, which is what has made literature from various regions, accessible to people over the globe. The panel was then followed by a workshop on Short Story Writing by Author, Karishma Attari and a short poetry slam session.

One of the highlights of this event was having a 75-year-old lady attending the event with such great enthusiasm, from actively asking questions during the panel to participating in the workshop and performing poetry. She said, “I don’t know how to email on the internet. Will ask my son to open and show me The Bombay Review. How much time does it take to open? Because he never has time it seems.” 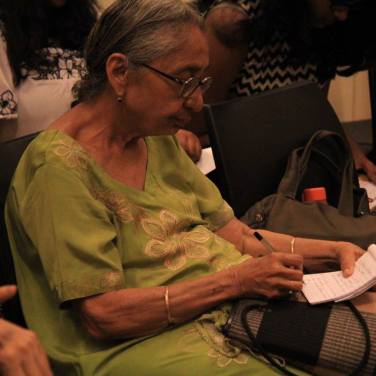 Similarly, we set up a little team in Lahore to hold a similar event. The event was well planned and the coordination between both teams was flawless. At Lahore, the event was held at a local bookstore and hosted by our three team members in Lahore, Zuha Siddiqui, Baneen Fatima and Sara Siddiqui, all three have done a lovely job in making this project a successful one. The panel at the Lahore event, mainly talked about South Asian Literature in specific reference to graphic novels as the creative medium, and looking at it’s scope in cross culture collaborations, specifically between India and Pakistan. The panel was moderated by Dr Furrukh and included Graphic Novelists, Zain Naqvi and Haider Ali Jan, authors of the book, Sparrow at Heart, which is partially set in the city of Mumbai. Followed by the panel, a discussion with author Kanza Javed was held, where Fiction Writing was discussed, as the medium to cross-cultural collaboration between India & Pakistan. Following the same pattern, the event ended with a short poetry session where people were given the platform to express themselves through words and verses.

In this issue we have some great writers and poets from around the world, whose work is coupled with some good work from our illustrations team. In continuation with our project on India and Pakistan, our May-June issue will be a themed one, open only for the countries. The deadline is around the corner – May 10, so hurry! And send in your work!

Lastly, we would like to update you with our team composition. TBR went through a major team shuffle last month, with most of its previous core members not a part of it anymore. Huda Merchant is now Managing Editor, Delna Anna Abraham is Art Director, Ushnav Shroff is Fiction Editor and I remain, yours, humbly, the Editor. We wish Aravind Jayan and Garima Pora all the best in their future endeavours.

Hope you have a good summer. Keep reading, keep submitting!