We’ve both spent most of our lives in Aurangabad and although we come from fairly progressive backgrounds, a shift from a tier-two city to a metropolitan can be unnerving. Our graduate education in liberal arts at Christ University, Bangalore and Lady Shri Ram College, New Delhi was first a systematic questioning of the social systems we have been brought up in and inhabited, either consciously or unconsciously, and a piece-by-piece deconstructing of these systems. The extent to which most of us internalize gender norms is alarming, and the glaring influence of their debilitating effects becomes clear only when you begin talking about them. What Gender Bender Aurangabad aims to do at the core of it is initiate conversations in an essentially non-threatening manner and with as little jargon as possible at its initial stages around, i. the patriarchy, ii. the gendered body and iii. the gender spectrum. To assess the demographic we are dealing with, we conducted interviews of sixty-six persons, most of whom were school children. We used a rapid-fire questionnaire that consisted of thirteen items that were mostly yes/no questions like “Do you believe pink is for girls and blue is for boys?”, followed by three subjective questions to understand the ways in which people face gender discrimination, whether they think they can contribute to eradicating inequality and what their understanding of feminism is. We received politically correct answers for some questions, but our overall findings reveal that our interviewees have very fixed ideas of gender roles: most people believe that pink is for girls and blue is for boys, that the man must give the flowers on the anniversary and that the mother must ideally pack the lunch box, to state a few. On the basis of the responses we received, we prepared a preliminary 47-minute long film ‘equal’, edited by Vikas Bhagure, directed towards acknowledging the existence of and attempting to challenge stereotypes. Our plan is to now expand our sample to at least hundred people and distribute them evenly in terms of age-group to make our study more reliable. In the coming year, both of us will be using our conclusions here as basis for academic research.

Gender Bender Aurangabad 1.0 consisted of an exhibition of photographs and paintings, five screenings of ‘equal’ and a set of poetry performances. Poetry and prose submissions from Aurangabad and elsewhere were invited and compiled in a volume titled ‘Reflections’. We found our audience to be extremely receptive and responsive. Several people expressed an interest in being associated with and taking our cause forward. There was an underlined apprehension that both of us felt before the event: are people going to be open to these ideas? We have realized that it is not for us to decide how ‘open’ or ‘closed’ people are; such a judgement can be critically limiting. It is upon us to at least attempt to deliver an idea, and pitch it in a non-aggressive manner, calling out to people more than calling people out. No idea that has fundamental human rights as its premise can be branded ‘too radical’. Our experience of performing poetry at what we can safely call our home ground was phenomenal; the energy in the room was overwhelming and watching people snap to our words assured us that we were creating some waves of feeling.

The photo installations by Swastika Jajoo were grouped into five different series, excerpts from whose concept notes do well to sum up ideas of toxic masculinity, the silencing of women’s voices and the smothering sexualisation of a woman’s body.

Crushed: We used the violent deconstruction of a (supposed) symbol of femininity to portray the physical and visible changes boys and men undertake and the invisible psychological effects of the same.

How to Sit: It is suffocating to have one’s every move monitored and governed by the same societal norms that sexualize your body. How To Sit shows you that comfort trumps normative ideas of ‘modesty’. 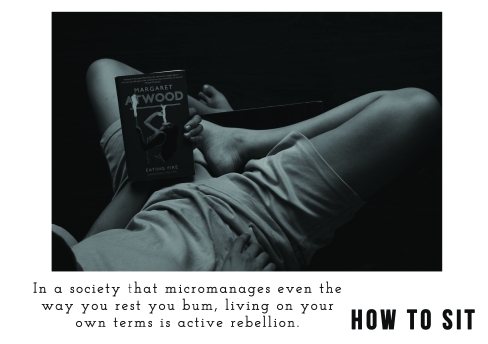 Masculinity: In a patriarchal world it is rare to find a grown man comfortable enough in his masculinity to not have to continuously reject femininity and all the traits culturally associated with it; softness, beauty, and emotion that is not a manifestation of aggression are kept inaccessible to boys and men.

Silencing: This it to say that we will not have our voices unfairly appropriated, that we will not respond to being catcalled with silence or to taboos with silence, that there is a need to reassess our well-meaning intentions when we ask women not to stay out too late or to wear ‘full’ clothes. 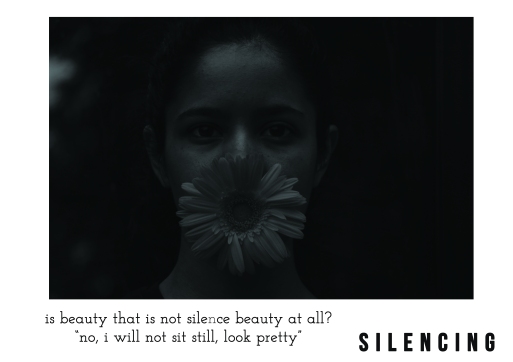 Nope: Female and feminine bodies are fetishized so extensively and inescapably such that if left uncovered, collarbones, shoulders, waists, thighs – even knees are perceived as sexual invitations. This series reiterates that the female body is not public property.

Meera’s paintings ‘Strangled’ and ‘Contour’ dealt with issues of gender expression. ‘Strangled’ forces the viewer to acknowledge the violence of gender conformity, when one’s gender must be expressed in only certain ways. ‘Contour’ is about the use of make-up as a versatile tool for artistic self expression, where contour and highlight can even change one’s perceived gender if one pleases. The point is to question our ways of thinking where one must be either a man or a woman, and entirely so on the basis of appearance. Freedom and choice in terms of gender identity and gender expression are constantly denied to us.

We are now headed abroad for further studies and will return in a year. We are, however, working on collaborations to ensure that we can have at least one event per quarter till we return. For now, we would like our initiative to be Aurangabad-centric because we believe that this is our way of giving back to the city we have grown to love.

Please feel free to write to us at genderbenderabad@gmail.com, and do follow our page ‘Gender Bender Aurangabad’ on Facebook . Our short film ‘equal’ can be viewed on https://youtu.be/-0valX452QY.

“Beautifully crafted and with a sophisticated selection of new and more established voices.” – Mahesh Rao, author, ‘One Point Two Billion’

“Young, energetic, ambitious. TBR travels, as all good writing should, across borders and ways of seeing.“ – Githa Hariharan, author, ‘The Thousand Faces of Night’

“It is clean, fresh and audacious. A very valuable addition to journalism and literature.” – Kavery Nambisan, author, ‘A Town Like Ours’

“True to the spirit of the city it is named after, The Bombay Review encapsulates those aspects of writing that makes for timely, important literature: namely, depth, diversity, and detail. A true labor of love.” – Murzban F. Shroff, author, ‘Breathless in Bombay’ and ‘Waiting for Jonathan Koshy’

“TBR is both intelligent and dynamic and I love its energy and choice of writing showcased.” -Anita Nair, author, ‘Idris: Keeper of The Light’

“TBR is one of the most exciting literary ventures to come out of India recently. It has exceptional art and writing, which this anthology stands testimony to.” – Akhil Sharma, author, ‘Family Life’

We need your support.